From One Million Worlds Wiki
Jump to: navigation, search

Scripting blocks are the most advanced blocks in the game, you can play the game without ever having to deal with scripting blocks. Here be dragons. 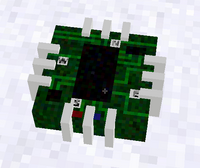 The idea is that they can accept a small text program and replace a huge load of wiring with just a little bit of text. You can set the script by interacting with it

So they can convert something like this (which is an automated turret that tracks and fires at the player): 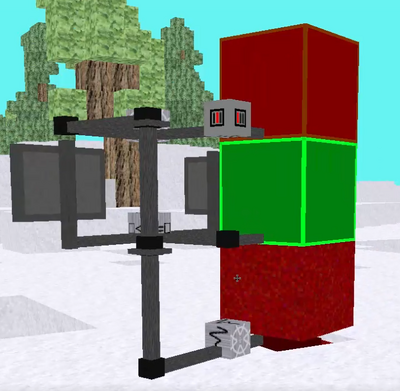 With something more simple: 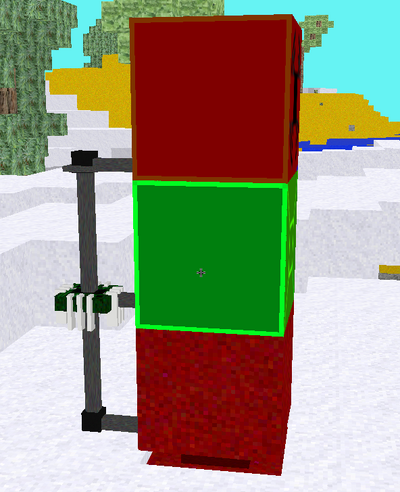 The inputs and outputs are all referred to by the letters N,S,E,W,U,D for north, south, east, west, up and down. The N,S,E,W are shown on the chip itself, the up and down you’ll just have to figure out for yourself. You can set a direction equal to a value and that value will be output to that directions. e.g.

You can output to multiple directions in a single program

You refer to the inputs in the same way, so say you have a number inputted in the West port and wanted North to be twice the West value you could use the following script

If you only have one output equal to a simple equation (or want all your outputs to be the same) you can omit specifying what output you want the value to go to, so you can simplify the previous program to this:

You can use the “if” keyword (and a whole bunch of brackets!) to do different things based on a question. So lets say you have an input W that is the distance away a player is (reported by a scanner block) and if the player is closer than 5 meters away you want to show on a screen (connected to N) “Go away” and raise a door (a Rail block connected to S) but if they do go away reopen the door you could use this program:

Sometimes you want to calculate something once and then use it several times, you can store it in a variable

Sometimes a piece of data has several parts, like a position might have an x, y and z. These can be both read and creating within scripts. The main place you’ll see these is inputs coming from scanner blocks which report positions as an array of 3 numbers. For arrays that enter on inputs you can refer to them in 2 ways:

This way of referring to arrays only works with arrays entering on inputs, not ones you create yourself.

Be aware when using numeric indexes the first entry has index 0; the first value is N[0], not N[1].

You can create arrays using square brackets. for example this program would return an array of the numbers 1,2,3

You can of course use variables

Some data is provided in variables for use in your script (note, variables are case sensitive). At present these are:

Usually the script runs a fresh each time, forgetting all its variables, but it is possible to remember things from run to run, this is done using the persistent (or p) scope. Also because I really struggle to spell persistent you can also use the persistant scope and that will work fine. Anything in the persistent scope will still be available the next time the script runs. So lets say we want to modify the “go away” script from the “asking questions” section so that if starts saying go away if you come within 5 meters but then it keeps saying it until you are 10 meters away:

A small number of inbuilt functions are available

Used for debugging, you can pass log a variable and it will be shown on the script block setup screen. This is log as in "put it in the log book", not the mathematical meaning

This will provide functionality to stabilise a system, e.g. if you have a turret that’s looking at the player, with a scanner block controlling an axel to make it look directly at the player, you set it up and it seems to work fine but it keeps swinging back and forth. Introducing a stabilise around the output will calm everything down.

(For the mathematically inclined, it is a PID controller)

The proportional, integral and derivitive terms can be ommitted and sensible defaults are used instead. The meaning of the terms are as follows:

You don’t need loops, please skip this section. Ok fine, loops are useful when you want to do something more than once.

Lets say, in the “go away” example the closer they get the more you want to say go away, lets say one exclamation mark for every meter they get towards you. A loop can do that.

If any problems occur with your script the errors are shown when you next open the script panel. It will tell you the line number and letter number where it knew for sure that your script was wrong, its possible it went wrong before this but that’s its best guess at where it went wrong

The script used within OneMillionWorlds is actually a variant of JavaScript. I’ve made some additions but broadly if your script is valid javascript it will work. I haven’t covered anywhere near the full features of the language so if you’ve got to this point and want more there are many resources for javascript available online.